Planted in the 1880s, Jackass Hill is the only vineyard that Giuseppe Martinelli planted that is still in use. It is the steepest, non-terraced vineyard in Sonoma County, California and possibly the US. The steepest section is a 60-65 degree slope, and it is illegal to plant anything over 30 degrees today. Our family always says “you’d have to be a jackass to farm a hill that steep,” hence its name.

These vines are dry farmed and over 130 years old. Giuseppe died at 55 years old, and because his 2 eldest sons were not interested in farming this vineyard, they gave it to their youngest brother, Leno Martinelli. Leno dropped out of 8th grade to become a full-time farmer. He farmed Jackass Hill from the time he was 12 years old until he was 87. Part of those 75 years he did it behind a horse and plow, then eventually a John Deere crawler. This crawler Lee Martinelli Sr. still uses today. Lee Sr. is Leno’s only son and is the current Jackass on the Hill at 81 years of age. He farms the ancient vineyard much as his grandfather Giuseppe had one hundred years before, without irrigation, pesticides, or trellising. 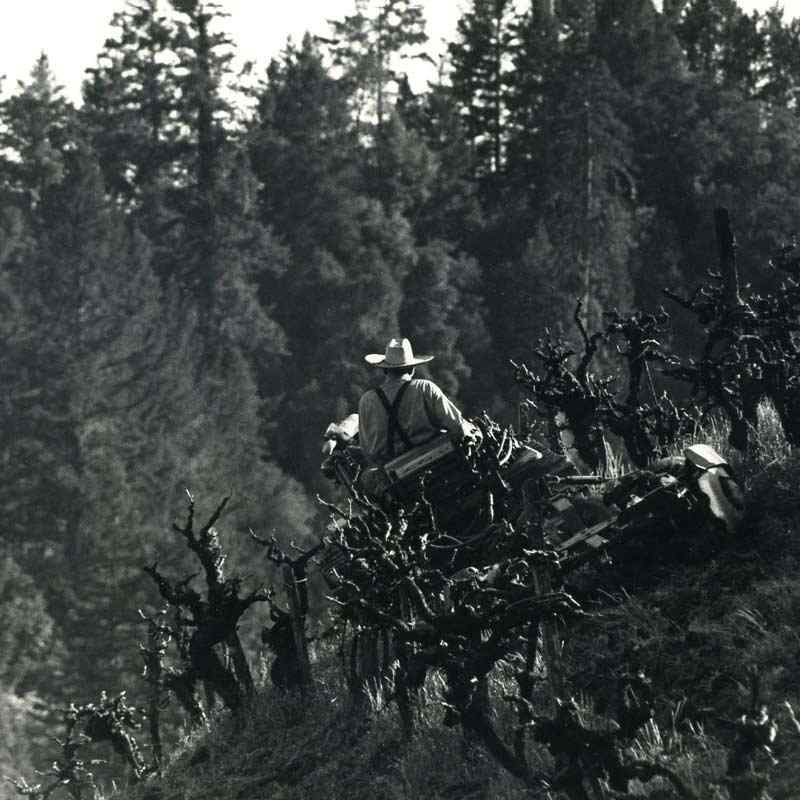 In the 1880s, at the ages of 19 and 16, Giuseppe Martinelli and Luisa Vellutini eloped from their small village in the Tuscany region of Italy, making their way to California looking for land to farm and start a winery. Giuseppe had been a winemaker/chemist in Italy and with his viticulture knowledge he was hired to plant a vineyard for a farmer in Forestville. Within two years he earned enough money to purchase land of his own. Working side by side on a 60+ degree slope, Giuseppe and Luisa planted a small area of Zinfandel and Muscat Alexandria vines, which later became known as our Jackass Hill vineyard. In 1918 Giuseppe died, leaving Luisa with four children, the winery and the vineyards. Their youngest son, Leno took on the sole responsibility of farming the Jackass Zinfandel vineyard from age 12 until he was 87 years old. Luisa lived another 21 years after Giuseppe died. She was very close to Leno and lived with him, his wife, Alma Bondi, and their two children Joyce and Lee, until she died.

When Leno Martinelli’s father, Giuseppe, died, he took over Giuseppe’s vineyards, Jackass Hill and Jackass Vineyard, at age 12. Leno was the youngest of 4 children by at least 10 years. His older brothers gave him “that really steep hill to farm”... because only a jackass would farm a hill that steep, 65 degrees. Leno farmed it with a horse and plow at age 12 (1918), then eventually buying a John Deere crawler in the 1960’s. He farmed Jackass Hill until he was 89 years old, (77 years). Leno made his own wine, grew apples, had a fabulously lush garden, was a sore loser at pinnacle and hunted the deer that ate his grapes. He was known to sew his own deep cuts shut with needle/pliers, and tan deer hides to make work gloves. He was the quintessential subsistence farmer, living off only what he grew or hunted. He lived a sustainable life before it was certifiable. Leno taught his son, Lee Sr., how to farm apples, prunes, grapes and make wine and grappa. Leno retired from farming at 89 years old, handing his lands over to his son, Lee Sr to farm. Lee Sr farms Jackass Hill today at 80 years old.

Lee Martinelli, Sr. is the patriarch of Martinelli Winery, and the sole farmer of Jackass Hill. Jackass Hill, which is still home to the same vines that were first planted by his grandfather over 100 years ago, is known for having the steepest non-terraced vines in Sonoma County and was named because only a “jackass” would be foolish enough to farm it. “Everyone tells me Jackass Hill is too dangerous to farm, but I feel a responsibility to these vines. My father worked this vineyard every day for 75 years, and it has given so much to our family,” he says. Born and raised in Sonoma County, Lee Sr. began working in his family’s vineyards and apple orchards at the age of six. He learned the value of hard work at a young age, sometimes having to work late into the night. “Even at the age of nine I was up working in the middle of the night. The Russian River Valley’s nighttime fog is great for grapes, but not very beneficial to sun-dried prunes, so I’d have to wake up at 2:00AM to pick them all up. It was the worst job, but years later it helped shape my own parenting philosophy.” As an adult, Lee Sr.’s family encouraged him to choose a more lucrative career due to the unstable nature of farming. Thus, after marrying Carolyn, he went to work in electronics for five years at Forestville Transistor as a quality control administrator. While he initially enjoyed working inside an old winery building, there was no natural light and he felt detached from the natural elements. Nature was calling and with one child at home and another on the way, Lee Sr. chose to go back to school and start a new career. Initially, Lee Sr. studied Agricultural Business and Plant Science at Chico State, but after assessing career and pay options, he opted to get his teaching credential from UC Davis in 1967. Upon returning to Sonoma County to teach at Santa Rosa High School as an agriculture instructor, Lee Sr. was informed that his father would soon retire. Lee Sr. decided he would step into the role of managing the family farming business, and for the next five years he taught during the week while spending his weekends farming 17 acres of apples and grapes, and raising cattle. In 1973 when Lee Sr. took over his Uncle Tony Bondi’s apple orchards and vineyards, he retired from teaching to focus full-time on farming. “I knew all along I wanted to work outdoors. I knew it would mean longer hours and harder work, but that is the price to pay for satisfaction. I learned to love the sense of accomplishment after a long day of farming, and the freedom of being in control of my own destiny,” he says. Over the next decade, Lee Sr. went on to farm 450 acres of apples and grapes while serving as a board member for organizations like the Santa Rosa Sotoyome Soil Conservation District, Sebastopol Co-Op Cannery, Forestville Elementary School and Sebastopol Apple Growers United. He also received numerous awards including Outstanding Young Farmer of the Year in 1978, an award which both of his sons would later receive. In recent years, Lee Sr. has passed many of his responsibilities on to the fourth generation, which consists of his four children. He can finally find time to work on personal projects he’s been waiting to get to for 47 years. He recently purchased land near his home which he is fixing up, clearing out old wood and repairing roads. He is also restoring an old 1917 Hudson car which was originally purchased brand new by Giuseppe, as well as a two-horse surrey from the 1800s purchased by Louisa Martinelli upon Giuseppe’s death to provide her transportation to town. A lifelong hunter, Lee Sr. can now schedule trips during hunting season, which overlaps with the grape-growing season of August to October. “It took me 47 years to finally give up some of my work responsibilities. I had to convince myself, but I feel freer. The more time I take off the more I want to do,” he says. Even so, Lee Sr., when asked if he’ll let one of his kids farm the Jackass Hill Vineyard, he responds with a twinkle in his ice blue eyes that he has no intentions of passing the reigns. He still enjoys finishing a day’s work in the vineyard, and opening up a bottle of the wine when the day is done to make sure the risk and sweat was all worth it. “It always is,’ he says.